Supporters of the APPG wrote to the APPG Chair, Lucy Powell MP, stating they believe it is essential that Greater Manchester’s hospitality and cultural sector is given the help and support it needs to bounce back; asking Lucy to urgently highlight to Government Greater Manchester’s 5 key asks for action and recovery:

You can read the full letter to Lucy Powell MP from Greater Manchester Hospitality and Cultural Sector Supporters here.

Education, Employment and Skills in Recovery 21.07.20 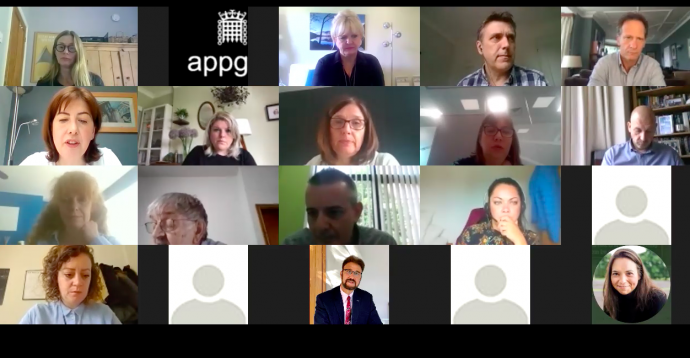 Click the image for the full recording of the Education, Employment and Skills session. 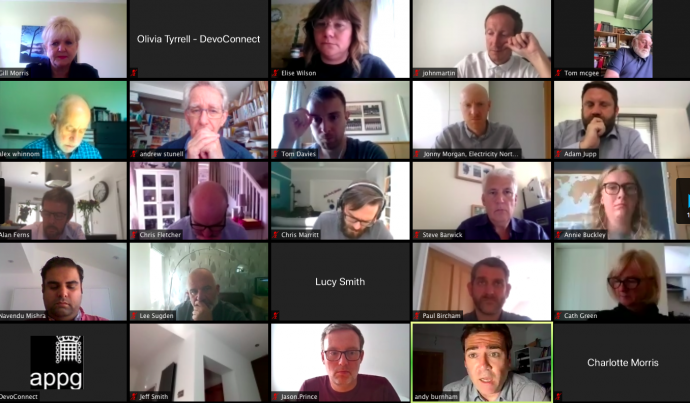 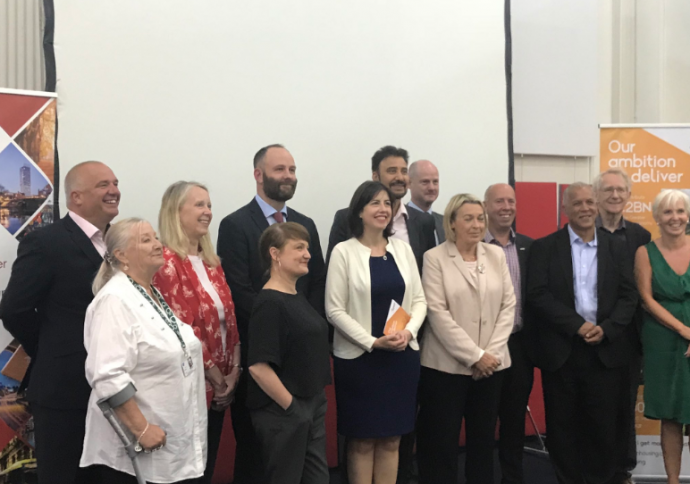 The Greater Manchester APPG met on 20th July in collaboration with Greater Manchester Housing Providers, to launch the GMHP’s ‘Ambition to Deliver’ report. Lucy Powell, MP for Manchester Central and Chair of the APPG, opened the meeting by explaining that this was a ‘listening event.’ With around 60 attendees from across the housing sector, there was no shortage of experts to hear from.

Several issues were raised at the Housing Summit, which featured a short presentation by Paul Dennett, Mayor of Salford, and a roundtable with a variety of industry experts. The Mayor said it was great to finally see housing become a political priority, as it is more important now than ever.

One of housing’s key challenges is the consistent under-delivery of affordable homes, even according to the government’s flawed definition of ‘affordability.’ There is a growing private rent sector in Greater Manchester, with home ownership plateauing in recent years. The government’s housing white paper encouraged planning the right homes in the right places, diversifying the market (including using SMEs) and increased housing delivery (even from social landlords). Matt Whiteley, of HIMOR, spoke about the lack of diversity of housing types (e.g. most inner city homes are small apartments). Most people do not aspire to live in places like this – families’ needs must be met. The lack of suitable homes has caused a social housing crisis and a rapid increase in homelessness. According to Dennett, 85,000 households are on the waiting list for social housing in Greater Manchester. Reasonable and non-reasonable preferences are not uniform throughout the city-region; 30,000 households have reasonable preferences, yet are still waiting. Regional MPs, like Lucy Powell and Afzal Khan, said ‘right-sizing’ is a common problem in casework and Manchester lacks one-bedroom social homes. Helen McHale, representing Greater Manchester Housing Providers, said that housing providers can help with these problems, but there must be a conversation about how to maintain quality whilst making properties affordable. Whilst Andy Burnham is attempting to encourage less high rise building in the city and more outside of the business district, ‘soft power’ (influence, pressure and cooperation) is key.

The conversation soon became about more than housing. ‘Place-making’ – creating homes that are enjoyable and stand the test of time – was seen by some, such as Paul Dennett, as an essential part of the housing question. In Stockport, they have explored the idea of using empty shopfronts in town centres as homes for this purpose. Another common concern was construction skills. Lord Andrew Stunell said that 80% of trainees never make it to the field, mostly due to a lack of jobs or their unsuitablity for the trade. Lucy Powell found this ‘concerning,’ and suggested part of the region’s apprenticeship budget be used to solve this skills and construction issue.

The Greater Manchester APPG wrote to the Secretary of State for Transport, the Rt. Hon. Chris Grayling MP, on Friday, seeking assurances that the proposed third runway at Heathrow would not detract from investment in the North and Manchester Airport, ahead of Monday’s vote on the aviation National Policy Statement.

On Monday, Grayling responded to the letter detailing some of the commitments to the North the Government has set out.

The letter, co-ordinated by Lucy Powell MP and signed by 21 Greater Manchester MPs is available here, with the Secretary of State’s response here.

Both letters are copied in full below.

END_OF_DOCUMENT_TOKEN_TO_BE_REPLACED

On 4th June, Andy Burnham, Mayor of Greater Manchester, was called to give evidence at a select committee hearing on Devolution and Exiting the EU. Below is an extract from the minutes – read the full version here.

If you look back in time, if you take issues like industry, when the north needed help with manufacturing, all the focus down here [in Westminster] was on the service economy. When you look at education, all the focus has been on the university route, when we wanted more focus on technical education. If you take housing, all the focus has been on owner occupation, when we needed more focus on other forms of tenure. This is the problem that we have had in our country and I think the seeds of the referendum result are in there. There is a sense that in England particularly, the interests of some places predominate over those of others. I think that is a big part of our problem.

END_OF_DOCUMENT_TOKEN_TO_BE_REPLACED

This is an extract from Sir David Crausby’s debate on Northern Rail services in Westminster Hall on 6th June. Read the full version here.

When I was elected 21 years ago, in 1997, our railways were still, in effect, publicly owned. The reality then was that the service was rubbish, and it had been rubbish for a very long time. John Major, the then Prime Minister, having starved the railways of investment, privatised them in indecent haste—I think he thought that would be his legacy; perhaps it is—just before he was forcefully expelled from office in the 1997 Labour landslide.

Northern is the trading name of Arriva Rail North, whose franchise began in April 2016. Provided that it does not walk away, we may suffer it until 2025. Arriva Rail North has been a disaster from day one. It has been in freefall ever since, and it does not deserve to be entrusted with the franchise for another day. In Greater Manchester, Northern trains call at 97 stations, which are used every day by a huge number of people, who depend on the service to go to work and education, as well as to enjoy their social and family lives.

The quality of those services is essential to the lives of thousands of families and has an enormous effect on the economy of the north. It is a very big deal. We must not allow the political argument about our transport deficiencies to descend into the Government automatically supporting all private transport providers and the Opposition automatically attacking them all. Regardless of our views about nationalisation and privatisation, Northern rail is failing.

I congratulate the hon. Member for Bolton North East (Sir David Crausby) on securing this important debate and giving us another opportunity to discuss the disruption on Northern rail services.

The Department is focused on ensuring, as rapidly as possible, that the industry restores reliability for passengers to acceptable levels. I assure passengers who have been affected that I share their frustration, and we have heard from hon. Members across the House about how their constituents have been affected in a number of completely unacceptable ways.

I echo my right hon. Friend the Secretary of State’s words of sympathy on Monday, as well as the apology that he gave to the ​House. That mirrored the apologies from the chief executives of Northern rail and Network Rail, as well as from train operators in other parts of the country, for everything that has gone wrong and for all the difficulties that have been caused to people in the north of England and other parts of the country.

The latest meeting of the Greater Manchester APPG focused on strategies to achieve Mayor Andy Burnham’s ambitious plans for a carbon neutral city-region.

In his mayoral manifesto, Andy Burnham pledged to set out his ambitions for Manchester to become a “world-leading carbon neutral, green and clean city-region.” He delivered this in the form of the Green Summit which took place on 21st March. Lucy Powell, MP for Manchester Central, linked the Summit to other devolved projects and said it showed the importance of collaboration between local and national government.

END_OF_DOCUMENT_TOKEN_TO_BE_REPLACED

MPs, Peers, and the Mayor, Andy Burnham were joined by leaders in health and social care at the meeting, chaired by Lucy Powell MP. They discussed the state of urgent and emergency care, mental health, population health and other topical issues in the region.

END_OF_DOCUMENT_TOKEN_TO_BE_REPLACED 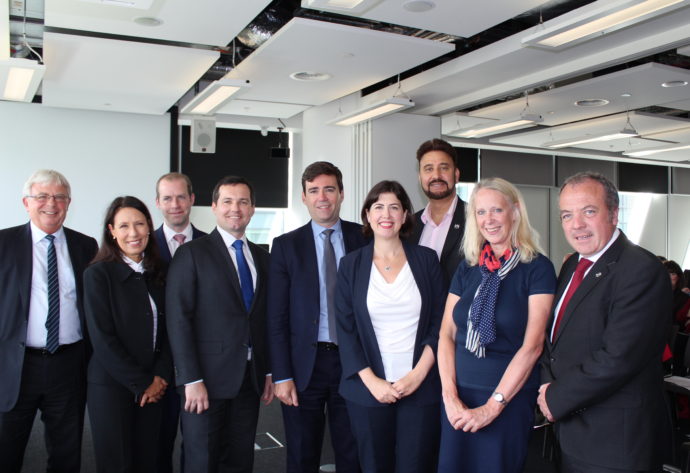 They will discuss the challenges facing the region and in particular how they can work together to make the case for greater investment in Northern transport. This follows concern at the Department for Transport’s announcement in July that plans to electrify key Northern rail routes would not go ahead in their entirety and confusion over what the alternative – bimodal trains – means. END_OF_DOCUMENT_TOKEN_TO_BE_REPLACED

We will be back in 2021 with a full program of APPG meetings!

Get in touch with us at [email protected] for more information.

The Greater Manchester APPG is kindly supported by: 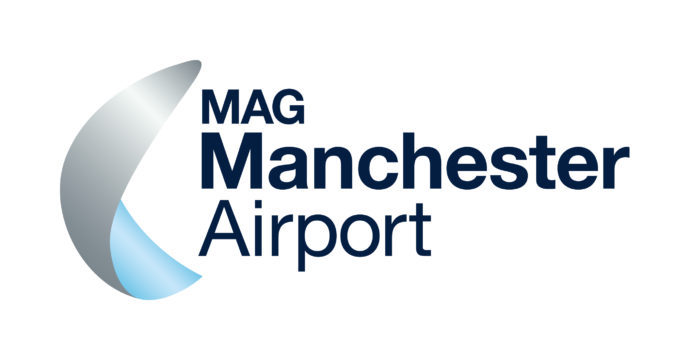 Becoming a partner of the Greater Manchester APPG provides your organisation with the opportunity to support and inform the work of the Group.

For further details please get in contact at [email protected].